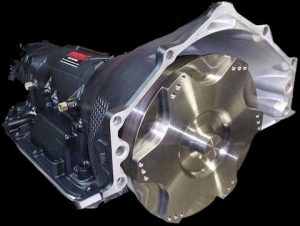 The 4L80E transmission is another General Motors transmission that was designed for longitudinal engine configurations. This particular series included four forward gears and is an evolution of the turbo-hydramatic 400. This transmission was optioned only in vans, commercial vehicles, the Hummer H1, and Chevrolet or GMC pickups. The 4L80E was later adopted by Rolls Royce and then modified, first used in the Bentley Continental R and then in other Rolls Royce and Bentley cars.

This transmission is rated to handle engines that have no more than 440 lb-ft of torque and a max gross vehicle weight rating of 18,000.

When choosing between the 4L80E and the 4L60E transmissions, the biggest thing you’ll need to consider is how much power you require from your transmission. The 4L80E has a lot more potential for power capacity as well as better power flow, more clutch capacity, and apply area. If you need more power in your transmission, the 4L80E just might be the transmission you’ve been looking for.

When it comes to weight, the 4L80E is a bit heavier in typical configuration at approximately 178 pounds while the 4L60E weighs in at about 135 to 140 pounds. These weights are at base stock configuration without a converter.

Locking Torque Converter Problems: a locking torque converter improves fuel economy by allowing for a true 1:1 connection between the engine and the rear wheels when traveling at high speeds. If it appears that the engine is turning faster than usual at highway speeds, you may have an issue with your torque converter.